Heart valve disease affects both the very young and very old people; however, pharmacological interventions for slowing down the disease are not available. Currently, it is accepted that the main players involved in the valve pathology are the dysfunctional valvular interstitial cells (VIC) and endothelial cells (VEC), which in healthy valves interact in a complex hemodynamic and mechanical environment to maintain leaflet integrity.

Materials/Methods. The 3D gelatin scaffolds were obtained by bioprinting different hydrogels using 3D Discovery® platform (regenHU, Switzerland), by crosslinking the GP-1 methacrylated gelatin or by electrospinning of gelatin aqueous solution. Human VIC were encapsulated in the constructs and VEC were seeded on the constructs. The cells included or attached to the surface of 3D models were analyzed by microscopy and immunohistochemistry using phalloidin and specific antibodies or were isolated from constructs and investigated by RT-PCR and Western Blot.

Results/Discussions. Three-dimensional constructs of aortic valve leaflets seeded with human VIC inside and a VEC layer on the top was obtained. Encapsulated VIC displayed a well-defined cell network and expressed low levels of alpha-smooth muscle actin compared with VIC in bi-dimensional culture. VEC seeded on the constructs adhered, proliferated and formed a monolayer at the surface of the construct, exhibiting endothelial specific markers, PECAM-1 and von Willebrand factor.

Conclusions. 3D models were obtained with a structure similar to that of aortic valve leaflet, with viable VIC encapsulated in constructs and VEC on the surface. The obtained 3D scaffolds will be used for further investigations of dynamic interaction between VIC and VEC, in order to understand the valvular disease progression and to develop potential therapeutic interventions. 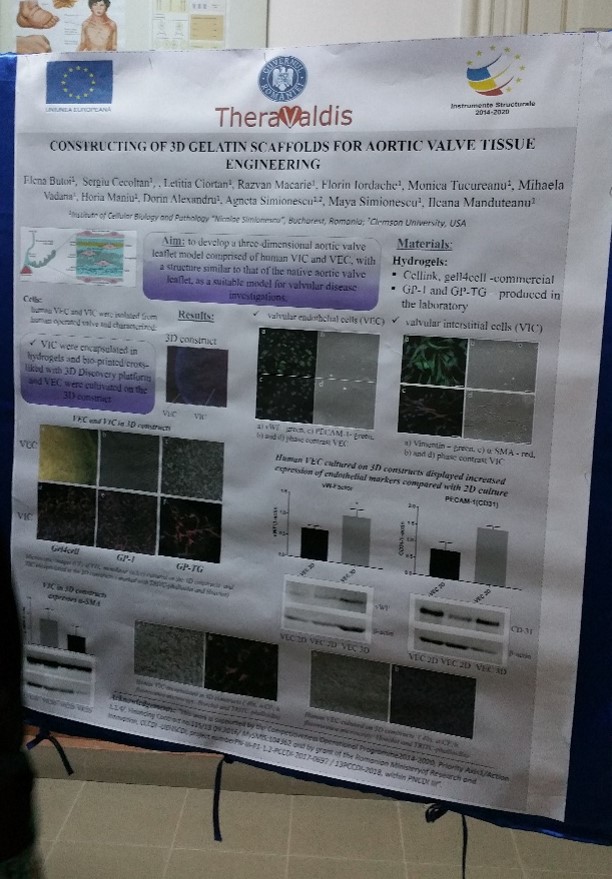