Abstract: Statement of the Problem: Calcific aortic valve disease (CAVD) is the third leading cause of cardiovascular disease being a progressive process, with initial valvular endothelium inflammation, followed by fibrotic thickening and extensive calcification of the valve leaflets. Currently, pharmacological interventions for slowing down the progression of CAVD are unavailable. Therefore, physiologically suitable in vitro models are required to study the cellular and molecular mechanisms of CAVD. Aim of this study is to obtain a 3D construct with a structure similar with the aortic valve leaflet. Materials/Methods. Human valvular interstitial cells (VIC) were encapsulated in bioink and bioprinted. Printing was performed with the 3DDiscovery® platform (regenHU, Switzerland) and several bioink formulations. Valvular endothelial cells (VEC) were seeded on the construct surface. The constructs were maintained in culture for 7-21 days. Evaluation of viability of cells was determined using Live/Dead and MTT cell viability assays. Cell phenotype was analyzed by immunohistochemistry using phalloidin and specific antibodies. Results/Discussions. In the current study, we obtained a 3D bioprinted construct with human VIC inside and a VEC layer on the top. Encapsulated VIC developed a well-defined cell network within construct and express low levels of alpha-smooth muscle actin (α-SMA) compared with VIC in bi-dimensional culture. The Western blot data indicated that bioprinted VICs have a less activated phenotype than those grown in bi-dimensional culture. VEC seeded on the constructs adhere, proliferate and form a monolayer at surface of the construct exhibiting endothelial specific markers: PECAM-1 and von Willebrand factor.

Conclusions. We have obtained 3D bioprinted constructs with valve leaflet structure, with viable VIC encapsulated in constructs and VEC on the surface. The obtained structure will help for further investigations of the dynamic interaction between valve interstitial and  endothelial cells, in order to study the valvular disease progression and to develop potential therapeutic interventions. 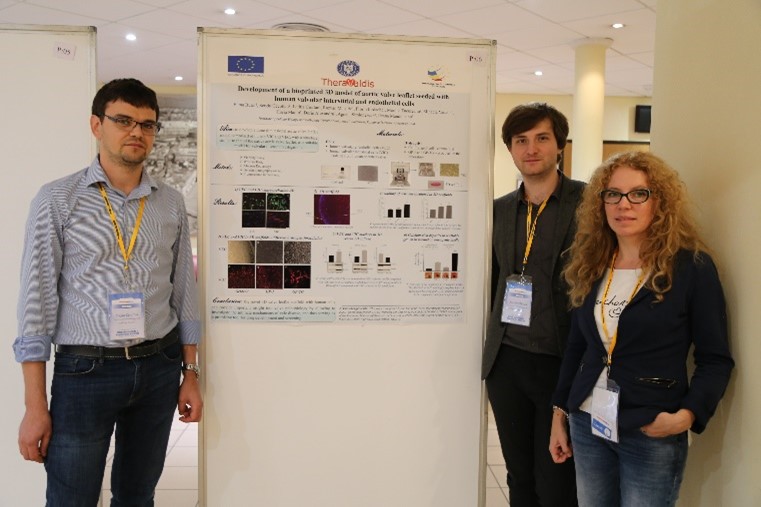