Calcific aortic valve disease (CAVD) is the most common valvular heart disease and is accelerated in diabetes. Although it is known that early CAVD is associated with inflammation and osteogenesis, the molecular mechanisms involved in diabetes associated with CAVD still need to be uncovered. In this study, we evaluated the effect of high glucose on early osteogenic markers expression, in a 3D model of human aortic valve. We have used an in vitro 3D-construct obtained by loading human valvular interstitial cells (VICs) in a methacrylated gelatin hydrogel and cultivation of human valvular endothelial cells (VECs) on the surface. The 3D construct was exposed to normal (NG) or high glucose (HG) conditions for 7 and 14 days. The valvular cells were isolated by enzymatic digestion and VECs were separated by VICs by positive selection using Miltenyi CD31 beads Kit. Osteogenic molecules expression was analyzed by qRT-PCR in VECs and VICs, by immunofluorescence on sections obtained from the 3D constructs and by ELISA assay from condition media. Moreover, development of calcification deposits was investigated by Alizarin Red staining. The results showed that HG conditions increased gene expression of RUNX2 and of BMP-4 in VECs, also an increased gene expression of RUNX2 and SOX9 and of: BMP-2, BMP-4, osteocalcin and osteopontin in VICs. We also detected an increased protein expression of osteocalcin and osteopontin in sections, and of osteocalcin in conditioned media after exposure to HG for 14 days. Moreover, HG conditions increased calcium staining compared with constructs grown in NG medium. In conclusion, our data indicate that HG levels induced an increased expression of osteogenic molecules and early calcification markers in valvular cells. In addition, HG enhanced calcific deposits formation in a 3D valve model with human cells. Our data may help to understand calcification mechanisms in early CAVD and mayindicate new targets for therapy. 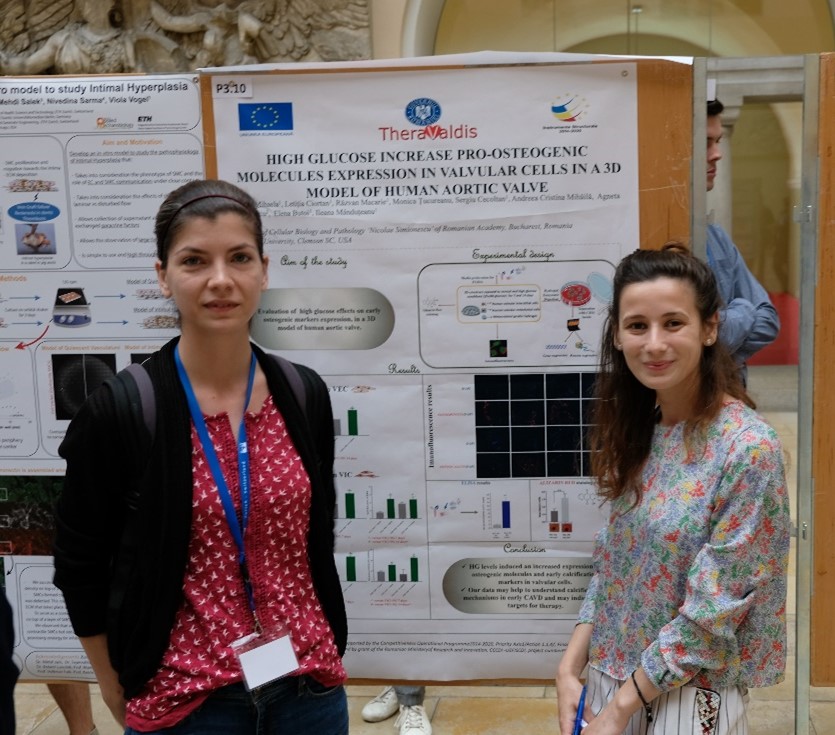