Introduction. Short hairpin (sh) RNA is an advantageous mediator of RNA-interference due to its relatively low rate of degradation and the ability to silence the expression of a specific target gene. shRNA is synthesized within the cell after transfection with a plasmid containing shRNA sequence. The aim of this study is to investigate the cytotoxic effect induced by lipid-based nanocarriers with different composition to establish the appropriate lipoplexes formulation capable to function as efficient transfection vectors for shRNA plasmid delivery in valvular cells. Methods. Different formulations of PEGylated cationic liposomes comprising cationic lipids, a helper lipid (e.g. DOPE) and a PEG functionalized lipid were designed and prepared in order to find the optimal composition for efficient delivery of a plasmid to valvular cells without cytotoxic effect. Lipoplexes were obtained by complexing cationic liposomes with a plasmid shRNA at various electric charge ratios (R) and further characterized for size (by dynamic light scattering), zeta potential (by electrophoretic mobility), morphology (by electron microscopy, TEM) and the capacity of liposomes to protect shRNA (by agarose gel retardation assay). The cytotoxicity studies were performed by 2,3-Bis-(2-Methoxy-4-Nitro-5-Sulfophenyl)-2H-Tetrazolium-5-Carboxanilide (XTT) assay after exposing, for 48 hours, human valvular endothelial and interstitial cells isolated from aortic valve to different types of lipoplexes formed at various charge ratios. Results. 1) the size of cationic liposomes was around 200 nm, whereas the size of lipoplexes varies as function of R (between 100 and 2500 nm); 2) the morphology of lipoplexes analyzed by TEM revealed the appearance of multilamellar vesicles with concentric lamellar structures; 3) the packaging and protection of nucleic acids by the complexation with different types of cationic liposomes depend on liposome formulation and R; 4) viability of valvular cells is influenced by charge ratio of lipoplexes formed with plasmid shRNA. Acknowledgements. This work is supported by the Competitiveness Operational Programme 2014-2020, Priority Axis1/Action 1.1.4/, Financing Contract no.115/13.09.2016/ MySMIS:104362. 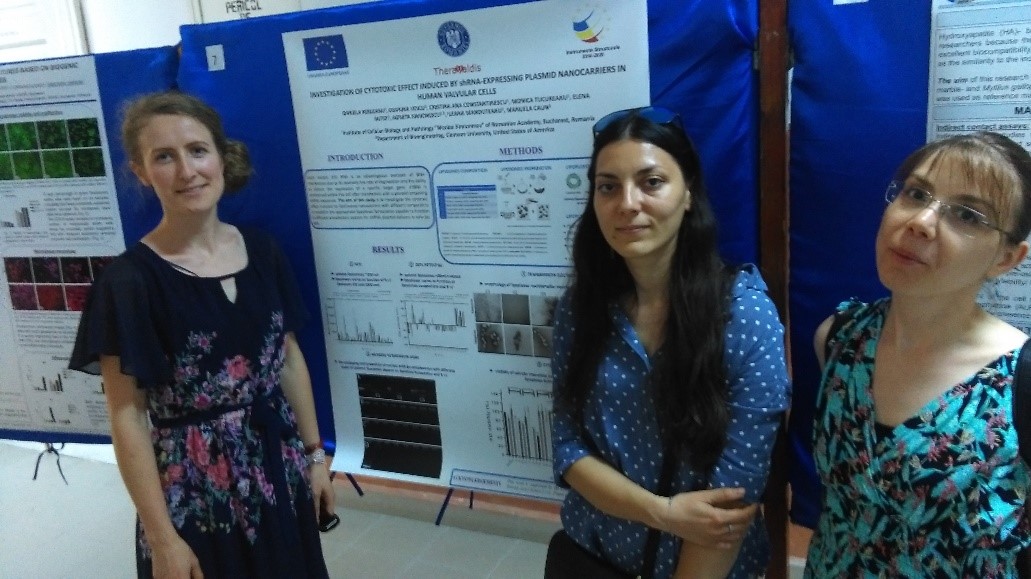