It is known that the presence of diabetes accelerates calcific aortic valve disease in human patients, but there are few mouse experimental models to study the early molecular modifications and possible preventive therapies.

Because the current models require at least 8 weeks of hyperlipidemic diet, we run a pilot study to investigate whether streptozotocin (STZ)-induced diabetes in mice fed with a hyperlipidemic diet would help the scientific purposes without affecting animal welfare.

Materials and method. Mature ApoE-deficient mice were injected for five consecutive days with low-doses of STZ intraperitoneally. Up to the 8 weeks of study, the mice were evaluated daily for glycemia, weight, food and water intake, and signs of distress. Where appropriate, subcutaneous insulin and fluid support therapy were administered. At given time points, the animals were sacrificed and samples were taken for further histological analysis.

Results. Diabetes onset (>300 mg/dL glycemia) and relevant histostructural changes were detected as early as the first week after last STZ dose. With one exception, all mice maintained a good general appearance thought the experiment.

Conclusions. Our study established an early model for aortic valve disease in diabetic ApoE-deficient mice, which allowed us to use in further experiments a reduced number of animals, for shorter periods of time without additional insulin or fluid therapy. 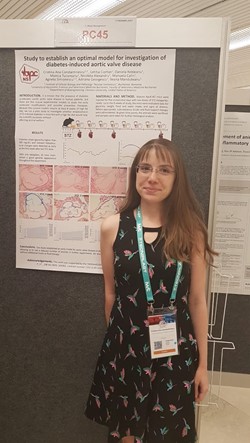